Maritime traffic is a significant part of international trade. As a result, there are growing concerns of the implications a maritime terrorism attack could have. Several prevention and response training programmes and organisations have been founded in the last decades to counter this threat. One of these is SEACAT. 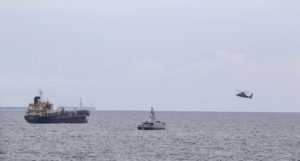 The evolution of SEACAT

SEACAT started in the wake of the September 11 attack as a result of concerns of potential maritime terrorism in South East Asia. At that time, there was fear of cruise ship hijackings and attacks on ships, such as the one on the USS Cole in 2000. Other scenarios involved hijacked tankers being turned into floating bombs to attack commercial ports or military ships. As such, the early part of SEACAT focused on cooperation and capability building between the United States and South-East Asian navies through interception and boarding drills.

Since then, the exercise has evolved due to the changes in technology, maritime security threats, and regional maritime security sector structures. Over the years, this has led to the involvement of more countries, including those from outside South-East Asia, alongside South East Asian maritime enforcement agencies and international civilian organisations. For example, this year, a maritime operations centre in the Republic of Singapore Navy’s (RSN) Information Fusion Centre (IFC) was used as a centralised hub for crisis coordination and information sharing. It focused on the tracking of contracted merchant vessels simulating suspicious vessels of interest throughout Southeast Asian seas.

Established in April 2009, the IFC is a regional maritime security centre hosted by the RSN to facilitate information sharing and collaboration between its partners. International Liaison Officers work together with RSN personnel as an integrated team to share and coordinate response information by regional and international navies, coast guards and other maritime agencies. Twenty-four countries have deployed liaison officers to the IFC. Information sharing and coordinated response has been a feature of SEACAT since it began, however, it has been enhanced over the years with improving surveillance and communication technological capabilities.

The coordination of information sharing

In the past, coordinated response to maritime security threats that spanned both territorial and international waters was limited due to two reasons. Firstly, the lack of timely information sharing in countries between their own navies and maritime enforcement agencies, and secondly, the timely sharing of information and cooperation with other countries. This was also hampered by the fact that information sharing could only be carried out via phone or fax machines.

However, advancements in information technology and data sharing overcame these limitations. At the same time, countries established their own Maritime Enforcement Coordination Centres (MECC). MECC allowed navies and domestic maritime enforcement agencies to better coordinate and share information. MECCs of differing countries also communicated with each other, particularly in the instance of ship hijackings that spanned the waters of various nations. For example, a ship would be hijacked in one country’s waters but then sailed off to another country to be disposed of, thus passing through both international and third-party waters.

Despite these established connections, however, limitations on information sharing were still encountered, as exchanges were mainly only on a bilateral level between the MECCs. In some cases, the exchange agreement would span several countries and occasionally there were issues as to what information could be shared to relevant countries who were not part of the exchange interaction. Thus, the IFC sought to address this issue by having a centralised hub in which liaison officers would be stationed to assist in coordination efforts in their respective countries. With information provided to one central hub, it resulted in better data collection and streaming. The effort was also aided by the fact that maritime security threats to countries in the region were by and large no longer coming from state, or state-sponsored groups, but rather independent criminal and terrorist groups with their own agenda. That being said, it should be added that evasion of economic sanctions via illicit smuggling by countries who had embargoes imposed on them are still ongoing while the advent of China’s maritime militia may change the dynamics on state sponsored maritime groups being a threat. 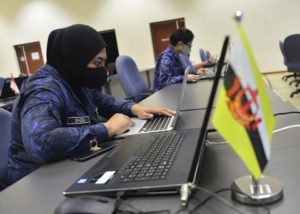 The cooperation of maritime security

Adding to the maritime security cooperation in South East Asia is the fact that many navies from outside the region are operating in these waters on national taskings, operational deployments and training, goodwill visits, or merely transiting en-route to another region. As such, the IFC allows these countries to respond to an incident if their ships happened to be nearby. Additionally, the multinational nature of the global shipping industry and seafarers means that even countries outside South East Asia have a stake or interest in an incident as well. Exercises such as SEACAT build upon this by having participants conduct scenarios involving multi-national coordination and tracking.

Technology, such as Automatic Identification Systems on ships has helped with the tracking and monitoring of maritime vessels, and has improved port security and procedures. Although such systems can be turned off, and now there is the possibility of signals being faked or spoofed, this technology has meant that ironically since SEACAT began, there have been few actual maritime terrorism incidents. Instead, the maritime security threats and issues largely consist of illegal activities, such as the smuggling of goods, drugs, arms and people, illegal fishing, and the illegal salvaging of sunken Second World War warships.

The illegal movement of people by sea has become even more of a concern these days due to the COVID-19 pandemic, particularly due to the fear that illegal immigrants would bring the disease undetected into a country. However, efforts to control illegal migration have been more of a national response in domestic waters rather than a multilateral response at sea.  Similarly in regard to Illegal Unreported and Unregulated fishing (IUU), multinational efforts face challenges in addressing it, particularly with overlap in bilateral disagreements on fishing rights or disputed waters along maritime borders with countries naturally protective of their own national fishermen.

For many countries in the region, the use of unmanned air systems (UAS) is emerging as a major tool in maritime domain awareness. UAS’ are cheaper compared to aircraft and helicopters and can be deployed far more easily from ships. Thus, they can be used in greater numbers. However, at the same time, UAS have a limited range and endurance in contrast to manned air platforms, and while cheaper, can still be costly to lose because of signal disruption or loss of control. UAS also have a limited surveillance payload. Irregardless, they do provide maritime enforcement units, especially small ships and units that are lower down the priority chain for aircraft or helicopter support, with an aerial surveillance capability. For that reason, it is expected that maritime enforcement agencies will be using UAS’ in larger numbers to assist with their missions. They will also most likely be used on unmanned surface vessels, allowing manned ships operating them to cover more surface surveillance and patrol areas. 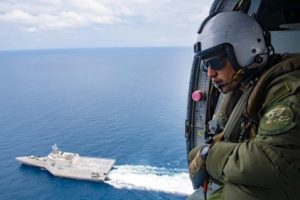 Overall, the SEACAT exercise shows that both navies and coast guards are now also including civilian agencies and non-governmental organisations into their sphere of information sharing and coordination. This is crucial, particularly given that many of the issues in maritime security overlap with the work of such organisations. Furthermore, current technology has also enabled such organisations to build their own information gathering and sharing capabilities. However, on the flip side, this improved technology has enabled criminal and terrorist organisations to enhance their management, resource allocation, funding, and information gathering capabilities with ease, through the use of common everyday mobile devices and applications. Commercially available UAS platforms can also be utilised or weaponised for the use of such groups.

However, it is impossible to restrict or control the availability and usage of such technologies for criminal or terrorism purposes, given their almost routine use in normal life. Thus, the duality exists, that while technological developments have led to improved capabilities for maritime security, they have also led to posing new threats.